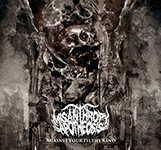 Aggressive Greek Death Metal straight into your face, from this Athens based duo. This is their second release, an EP released by Repulsive Echo Records, also based in Athens. MISANTHROPY APOTHEOSIS started out by releasing the full length album “Black Death Euphoria” by themselves, back in 2018 on Bandcamp and CD-R. That album is quite classic Doom-laden Greek Death Metal, as we have grown to like during the last many many years, the album is quite good and atmospheric, though perhaps heard a few times before. Nonetheless, I can understand why Kostas has picked up the band for Repulsive Echo, as there is some great potential for some future killer releases. On another note, the band delivers a quite well performed cover version of BOLT THROWER’s ‘The IVth Crusade’ on the debut, not a bad thing in my book ;). This new release is somewhat more aggressive than the material on the debut, straight in your face, really aggressive and intense. The dark atmosphere is kept, and even though the guitars are tuned low, it is not as Doom-laden as the first release, even though we get our breakdowns and slower dark passages, and a little magic from the bands that has inspired MISANTHROPY APOTHEOSIS in the some of the riffing. I had to use a few spins to get under the skin of this release, though the perspective opened when I took a listen to “Black Death Euphoria”. Even though the progression of the duo has been quite big, it is easy to catch where they come from, and where they want to go. Great riffing, good melodic lines, pounding and pushing rhythm patterns and great growls cloaked in a dark atmosphere. Quite a complete EP from these guys, I am looking forward to hearing more material from them. Enter the eternal: www.facebook.com/misanthropy-apotheosis-hellenic-death-metal-175943159651919, www.facebook.com/repulsiveecho