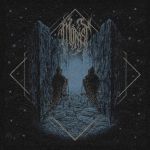 Although the title of the album is in Italian, this band comes from Germany and this is their second full length. MORAST plays an excruciating form of Death / Doom / Black Metal that relies in pure heaviness and simple, yet straight riffs. The vocals are harsh, although in my view a more cavernous style would fit better. The band relies on quite simple, yet effective riffs to create auras on their chants, with a very heavy and deep production, which gives the guitar a very crunchy tone. At times the sound reminds me of the very early works of PARADISE LOST and some bits to CELTIC FROST and in that same vein of early SAMAEL. There is also some Black Metal touches which recall early BURZUM and BATHORY but it is just in quite small doses here and there. The overall effect at times is trance-inducing, in an almost industrial-esque sound, very repetitive, yet with a heaviness that is always present. Their melody is always gloom and doom, the sadness is a feeling that the band is quite very good at evoking. I feel that some songs tend to sound a bit in a similar way, sometimes this style of doomed music is hard to swallow for everyone, but after a few listenings some of the ideas shine in darkness that those who are into really Heavy Metal that evokes death and damnation will surely find much to their likes. www.facebook.com/morastofficial, www.totenmusik.com