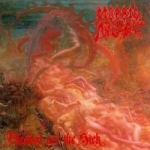 MORBID ANGEL can still, despite their recent shortcomings, never fail to elicit a spirited cheer within the Metal underground. They single-handedly crafted some of the deadliest, most sinister riffs in American Metal history. For that, they are forever deserving of the utmost respect. "Blessed Are The Sick" was their second album, the "B" album – an album that was, and is, appreciated just as much as "Altars Of Madness" even though the two albums sound very unalike. As Trey Azagthoth, the guitarist, himself explained in an old video interview, "Blessed Are The Sick", "… has got fast stuff, it’s got slow, sludgy stuff. It’s got everything." True to his word, "Blessed…" is much more varied in focus than its predecessor. The time changes, and discordant riffing that made "Altars Of Madness" so beautifully ugly are pushed to even weirder extremes. At times the album is a jagged rollercoaster, or a bubbling cesspot of molten rock, slowly but surely clawing its way upwards. The band even included an acoustic track, ‘Desolate Ways’. Acoustics are still treacherous ground to cross even today, but as with the rest of the album, MORBID ANGEL somehow managed to convince listeners that even slow(er) music can still be savage and mean. "Blessed Are The Sick" is not without its high velocity, but it requires an attentive ear to sense how truly vicious an album it is. The production is intentionally flattened and fuzzy, and while it has drawn some criticism, most people agree that the production works to the album’s advantage, not the other way around. Even if "Blessed Are The Sick" can’t claim to be the best MORBID ANGEL record, it nonetheless has classic tracks that no MORBID ANGEL concert would be complete without. Tracks such as ‘Fall From Grace’, ‘Unholy Blasphemies’ and ‘Blessed Are The Sick’/’Leading The Rats’, are nothing if not masterpieces. Earache has kindly re-released the album for the first time since 1995 as a multi-panel digipak dual disc complete with an hour-long video documentary "Tales Of The Sick: A Closer Look" on its flipside, featuring interview comments from 2009 by (a.o.) frontman David Vincent, members of NILE, ex-road manager Dieter Szczypinski, Tom Morris of Morrisound Studio and Trey’s former guitar tech Eric Partlow as well as the band’s promo video for the album’s title track. www.morbidangel.com, www.myspace.com/morbidangelofficial, www.earache.com.