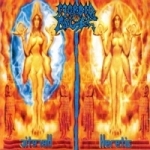 I was really looking forward to this new album as MORBID ANGEL still have a very special place in my black heart. But after having listened to "Heretic" a couple of times now, I’m not exactly sure anymore whether or not I should really praise this newest offering by Florida’s undisputed masters of Death Metal (almost) uncritically once again… It’s not that Trey, Pete and homecomer Steve Tucker have drastically changed their wellknown and always really immpressive writing formular, but for my taste there’s simply way too many instrumental pieces on offer this time. Out of the fourteen tunes there’s actually only eight "real" MORBID ANGEL songs. The rest is either moody and atmospheric, almost soundtrack-like stuff (‘Abyssous’, ‘Memories Of The Past’, ‘Victorious March Of Rain The Conquerer’, ‘Born Again’), quite noisy (‘Place Of Many Deaths’) or even turns out to be a drum solo (‘Drum Check’)! ‘Stricken Arise’ furthermore comes up with a more aggressive, a little bit less guttural vocal delivery, so I suppose that Trey is singing on that one himself again (but don’t quote me on that as I currently only own a promo version without any further info). Due to the fact that MORBID ANGEL have inspired zillions of younger Death Metal acts ever since "Altars Of Madness" took the underground by storm, it’s obviously getting more and more difficult for them to impress people with their typical style as there’s so many similar rooted, hungry outfits nowadays, who all deliver top notch quality as well (despite their factor of unoriginality of course). So, it’s pretty natural that MORBID ANGEL obviously aren’t interested in repeating themselves and I suppose that (in order to proof their superior quality and back up their status) therefore they have come up with a little bit more twisted guitar work and arrangements than usual this time. There’s actually partly some really weird guitar pieces to be discovered this time! But even if you take away all the aformentioned (unusual) elements and focus on the brutal Death Metal exclusively, stuff that MORBID ANGEL is best known for (‘Cleansed In Pestilence [Blade Of Elohim]’, ‘Enshrined By Grace’, ‘Beneath The Hollow’, ‘Curse The Flesh’, ‘Praise The Strength’, ‘God Of Our Own Divinity’ and ‘Within Thy Enemy’) it still does not release the same kind of enthusiasm inside of me as I know that they can do way better than this here. I hate to say this, but none of those tracks offers the same qualities that made MORBID ANGEL tunes so special in the past (no matter if it was highspeed crushers such as ‘Bleed For The Devil’ or doomy, more experimental stuff, such as ‘God Of Emptiness’) and therefore it seems to me that the musicians among you might appreciate the new material’s quality a lot more than the average Death Metal fan, which is too bad… Make up your own minds by checking out an mp3 sample of ‘Enshrined By Grace’ (on the Earache Records website) or when the album hits the stores officially in September.