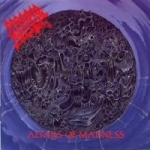 I have stopped counting how often this Death Metal milestone was re-released over the years in various different formats… Fact is that this re-issue here is pretty much superfluous and a bit annoying as there’s no difference at all in the audio part. The packaging is the same as the one used for the remastered re-editions that came out not too long ago (with enhanced booklets and stuff), just the additional slipcase is missing this time. So, the only reason to buy "Altars Of Madness" once again (I seriously doubt that there’s really anyone left among our readers without a copy) is the DVD – flipside of this dual disc, which is a crushing 10 – song live show, recorded at Nottingham’s ‘Rock City’ Club on November 14, 1989 when Trey and the guys supported NAPALM DEATH, CARCASS and BOLT THROWER on the legendary "Grindcrusher" tour. All those of you who know the promotional video for ‘Immortal Rites’ (which was shown on MTV pretty often) are already familiar with sequences of this event as they were taken from this particular show. No wonder that MORBID ANGEL really took off completely afterwards, cause with an album like "Altars Of Madness" and such impressive performances it would have been really strange if things would have developed differently for them. The overall recording quality of this DVD is pretty cool, the whole show was shot with various different cameras, luckily yet maintaining the steamy club atmosphere and energy of that night. I just wished it would’ve been released as a single DVD. But from what I’ve understood, the band wasn’t into that idea, so… Apart from that, this is an extremely cool visual document of MORBID ANGEL in their prime with a killer setlist! As a little extra you’re getting a replica of the original ticket for the show with this release. www.earache.com