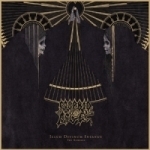 Ever heard a maxim "Divide and rule"? Both Caeser and Napoleon utilised it very well in politics and MORBID ANGEL is applying it to extreme music nowadays! I pity those poor souls who were outraged by "techno" tracks on "Illud Divinum Insanus", because with this double album (plus bonus Dropcard with another 8 tracks on a limited edition) MORBID ANGEL rubs more salt into their wounds – there are 12 versions of ‘I Am Morbid’, 8 versions of ‘Too Extreme’, 5 of ‘Destructos Vs. Earth’ and so on, all in all 31 tracks (plus 8 on the Dropcard) by the various bands and DJs from Electro, Techno, Hardcore, Terrorcore, Dubstep, Industrial, Cybergrind scenes. Before we go any further, I must warn all diehard Death Metal fans – you won’t like it. It will be literally too extreme to take in the whole massive amount of warped out remixes for people who are only used to Death Metal… or all Metal for that matter. And that’s okay, I know a lot of people who are like that, they find what they like and stay with it for the rest of their lives. But there are others (like me, hehe), who need to look for even more extreme or fucked up musical styles than Death Metal or Grindcore (which in year 2012 are well-established genres and not a groundbreaking, boundary pushing music like it was back in 1989, when "Altars Of Madness" came out). So while "Illud Divinum Insanus" divided the opinions of many fans, "The Remixes" take things way further into the leftields of extremity, much to the outrage of internet trolls bashing the original release of "Illud Divinum Insanus". Since I happen to be into a wide range of electronic music for about 15 years and really like the way MORBID ANGEL have been smashing the rules imposed by scene watchers, I dived into this compilation head down and immersed myself in this mad remix extravaganza. There are many well-known and respected artists involved in this project. It also shows the ingenuity of marketing – imagine more that 30 artists from different genres introducing MORBID ANGEL to their audiences through these remixes. Of course, this could very well end up like a flop, too, but time will show. I for one applaud this experiment. Now let’s dig behind the nails of this monstrous package. CD1 offers 16 remixes and the standouts for me personally are: LAIBACH with a huge sounding ‘I Am Morbid’, this one really sets the tone for the following insanity continued by cEvin Key (SKINNY PUPPY) / Hiwatt Marshall’s version ‘OmniDead’, they operate on the avantgarde edge of electronic music. BRAIN LEISURE from France takes ‘Too Extreme’ through EBM (that’s Electro Body Music) modification, TOXIC AVENGER adopts ’10 More Dead’ to a dancefloor crowd, that one is set to drive poor fuckers insane! Another version that has blown me away on the first couple listens came from BLACK LUNG (‘I Am Morbid’) – I’m a long time fan of that band and what David Thrussel did with this track is fucking unbelievable, it sounds as if it has been dragged through many layers of cosmic dimensions, must be heard to be believed!! EVIL ACTIVITIES adapts ‘Radikult’ to a Hardcore Techno crowd, MIXHELL de-extremizes ‘Too Extreme’ and turns it into a groove laden scorcher while XYTRAS buries you with a 1000 ton remix of ‘Existo Vulgoré’ spiced up with symphonic elements, it is hands down the heaviest tune on the first CD. Also worth mention are John Lord Fonda’s ‘Too Extreme (Metallizer Remix)’ and Mondkopf’s French electro take of ‘Radikult’. CD2 features another 15 tracks, Ahnst Anders opens it with a remix of ‘I Am Morbid’ which is hardly recognizable and is a pure, stripped down Industrial / Martial track. Highlights from this second set include BLACK STROBE (’10 More Dead’), TREPONEM PAL adding their very distinctive sound and style to ’10 More Dead’ and basically turning the track into one of their own. FIXHEAD and DJ Ruffneck deconstruct and rebuild ‘Radikult’ and ‘I Am Morbid’ respectively in such ways that will turn your brains inside out, this is total musical shizophrenia! IGORRR applies some digital Grind treatment to a track that I couldn’t recognize. By the time the second CD has run its course, I feel the need for some meat and potatoes, straight up, no frills, old school Death Metal, haha. And then there are 8 more remixes on a bonus Dropcard, my 3 favourites being: ROGER ROTOR (‘Radikult’), THE PROCESSUS (‘I Am Morbid’) and very fittingly MULK with a short and insane Cybergrind version of ‘Existo Vulgoré’, it sounds even more extreme than the original if you can believe it, but is not necessarily better for it. So if you are still with me, waiting to give you a definite recommendation… well, as I wrote above, if you consider yourself a die hard Metal fan, you’ll hate it, so better go and listen to old MORBID ANGEL albums. But if you’re just a tad curious about what’s going on in the leftfields of Electronic music, I suggest you give it a try, as you might find some very interesting reworkings and discover a few fucked up bands in the process, like I did with THE PROCESSUS and MULK. It’s best to be listened in smaller doses though (the above mentioned total playing time also includes the tracks from the Dropcard – Frank), get a digital download, make your own playlist and play it through a system with a subwoofer, because some of those tracks will make the ground rumble! You’ve been warned! www.morbidangel.com, www.season-of-mist.com