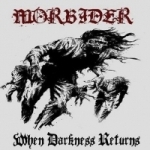 When the first riffs from Czech’s MORBIDER filled my room I had to check if this is the right album playing, because I could swear this is some DISMEMBER material I’ve never heard before. Or GRAVE. Or old UNLEASHED for that matter. Or maybe DESULTORY? Aah, no, this must be CARNAGE. No?? What do you mean, this is MORBIDER? Am I hallucinating? No, it seems my ears are still intact and these Czech dudes love that fat ’90s Sunlight Studio sound so much, that they decided to make a clone album of that golden era of Swedish (i.e. Stockholm) Death Metal. You know that “buzzsaw” guitar tone? MORBIDER is in sick love with that one! Now if that puts you away from this album, I wouldn’t blame you, because that’s the way I feel. I remember very well when in ’95-’96 you had literally hundreds of DISMEMBER, ENTOMBED, GRAVE and UNLEASHED clones and that wasn’t fun. But now, 15 years later, it became a “retro” thing and passes on as a cool trick to play. Well, whatever, I’m still not impressed and all those old albums from the genre’s masters sound much better. So after my initial reaction to slam MORBIDER away and get done with it, I thought I have to give them a break and listen to this CD without any prejudices (not easy thing to do, haha!). And what then? OK, these mysterious bastards X and Y (that’s what it says on their Myspace page) deliver come catchy, well played, dynamic old school Death Metal and tracks like ‘When Darkness Returns’, ‘Morbid Ways’ or ‘Beyond The Gates’ could easily be among Swedish Death Metal classics, had that list not been filled up like 15 years ago, hehe. Also the vocals are buried way too deep into the mix and therefore don’t pack enough punch and aggression necessary for a solid Death Metal album. Apart from that it really is a decent, albeit totally unoriginal, album to get your teeth into. Hell, I would buy these guys a case of prime Belgium beer for nailing down Swedish Death Metal hooks and riffs so well, but at the end of the day, why would I waste my money when I can get back to the old masters, you know? (well, I still think it’s a killer release, especially if you consider that 7 out of the 11 tracks were originally from the band’s demo (!), not to mention the great cover of the DISSECTION classic ‘Shadows Over a Lost Kingdom’, which closes this disc very impressively – Frank). It sells for 10,-Euro (Europe) / 12 Euro (rest of the world) ppd. from www.myspace.com/darkblasphemiesrecords. Band contact: www.myspace.com/morbiderdead