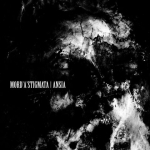 “Why did you decide to play such a psychedelic music?” – “Well, our guitar player just can not play but he owns a lot of external effect devices!” It is more than 20 years ago that I have read this in an interview and during all the years this dialogue comes to my mind when I listen to music labeled psychedelic and suchlike. “Ansia” is already the third album ( “Überrealistic“ in 2008 and “Antimatter” in 2011 are the predecessors) by MORD’A’STIGMATA from Poland and honestly, I have never heard this name before. Rooted in the Black Metal genre, the band is now characterizing their music as avantgarde psychedelic post Black Metal. Well, that kind of music is not really my favorite genre, so I can not tell if this release is just a copycat of other, more wellknown bands. I guess the last album which was categorized as avantgarde Black Metal I purchased was “Themes From William Blake’s The Marriage Of Heaven And Hell“ by ULVER back in 1998. But let’s take a listen to “Ansia”. Four songs, each one with more than 10 minutes playing time, plus outro. First of all I was surprised by the very fine and clear sound. The instruments are precise played and you can clearly recognize the well-considered songwriting. For my taste the slow parts are exactly timed. Just before it is getting boring the music is speeding up and a new tune is added to the song. So each song is taking the listener on a journey. Of course a journey into the darkside, the obscure, the hidden. No flower-power hippie like stuff, which is often associated with the term ‘psychedelic’. The vocals are done Black Metal style, the only relict from the band’s past. All in all I really like “Ansia” and from my point of view they can easily match up with ENSLAVED from Norway. Of course the progressive ENSLAVED era, which started after the turn of the millennium. When asked for influences MORD’A’STIGMATA are listing up band like BURZUM, BLUT AUS NORD, SWANS and even PINK FLOYD. So if you like the later ENSLAVED releases or are into a mix of above mentioned bands then you will probably like this album. For more information check out www.facebook.com/pages/mordastigmata/233330993440321, www.paganrecords.com.pl