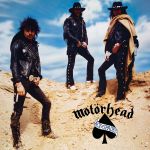 Back in October 2019, BMG released 40th anniversary editions of “Overkill” and “Bomber”, the two classic albums MOTÖRHEAD released during that distant year of 1979. One year later, it is now time for “Ace Of Spades”, arguably the band’s most popular output, to get the same treatment. Of course, there have been many different editions of “Ace Of Spades” in these four decades, including remastered versions, bonus material such as rare tracks (sometimes a whole extra CD or two extra LPs full of them), and so on. I myself have a couple such editions at home and I’m sure many readers of this review do too. So in this case BMG tries to offer value for money by coming up with hardback book-packs in two CD and triple LP formats, adding to the classic set of songs we know and love a previously unreleased concert from the “Ace Up Your Sleeve” tour. Naturally, you can also read about the making of the album while you see a number of coetaneous photos. Plus, if you want to spend some more money, there will also be an “ultimate fan collector’s edition” box set, with a number of goodies, such as a 10″ vinyl, a 7″ vinyl, two double live albums, a double album of rare tracks… in total there will be 42 extra tracks here. And also a DVD compilation, a 40 page book, a tour program, a comic book, a game with a set of 5 poker dice… you get the drift; a real deluxe edition. However, in this review I’m simply sticking to the double CD edition, so focusing on that what you get is, on CD 1, the album itself; 12 tracks of the best hard as nails Rock’n’Roll, heavy as hell Metal that the year 1980 took as a blow to the face. From ‘Ace Of Spades’ to ‘The Hammer’, not a feeble track in sight, and an understandable contender to MOTÖRHEAD’s best – even though this band has delivered a large number of equally monumental chapters in its history, including in my opinion some of their later creations (something I would find hard to say about the majority of the Metal titans that kept releasing albums well into the new millennium). On disc 2, we have a quality recording of a gig the band played on December 23, 1981 (a day before Lemmy’s 36th birthday) at the Whitla Hall in Belfast. 17 songs in total, good interaction with the public – giving you a taste of what being in a MOTÖRHEAD concert was like in case you were not fortunate enough to catch them – and a top class revisiting of their previous albums together with the expectable focus on ‘Ace Of Spades’ (unfortunately ‘The Chase Is Better Than the Catch’ was truncated to just 56 seconds because of tape flip – Frank). Is this worth getting just because of this gig? Probably not… if you are a fan of MOTÖRHEAD, even only the official offer of live material is so great you surely have plenty to go with already… and if you are a really die hard maniac (with a bit of money) you will probably go for the box. But if you don’t have this in CD, this version is surely worth getting and you can also hear an excellent recording of what the band was all about on stage, back at the time this most memorable classic was released. I sometimes still find it hard to accept that all three amigos on the iconic cover photo have departed from our presence, but the truth is that not many in the Metal world will ever be as immortal as they are. More information about this release is available at www.imotorhead.com, www.bmg.com