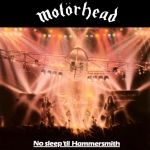 I guess I don’t need to introduce MOTÖRHEAD to anyone of you here. Lemmy and the guys released a lot of live albums in their 40 years lasting career, and it can be debated which one might be the best of them. But it can not be debated that their first full length live record “No Sleep ‘Til Hammersmith” is one of the most important live albums in music history. I remember vividly how I was blown away when I listened to it for the first time. It was in 1981, “No Sleep ‘Til Hammersmith” was just released a few weeks ago and I was still a kid of 11 years. This moment was the beginning of a lifelong love, highlighted by some occasions when I saw MOTÖRHEAD live on stage. Yet I never saw the “classic” line-up with Philthy and Fast Eddie that fell apart about one and a half years later. Maybe this contributed to the manifestation of my love for these live recordings over the years. But it might just also be that all of the eleven songs are fucking fantastic timeless songs that lost not one tiny bit of their class over the years. These songs sound still better than 99.9% of all the music that gets released nowadays. These songs sound better and younger now than ever. These songs showed a bunch of young and crazy bastards in the prime of their lives. And the track list of the album is just perfect for MOTÖRHEAD in 1981: ‘Ace Of Spades’, ‘Stay Clean’, ‘Metropolis’, ‘The Hammer’, ‘Iron Horse’, ‘No Class’, ‘Overkill’, ‘(We Are) The Road Crew’, ‘Capricorn’, ‘Bomber’ and ‘Motörhead’. And when I tell you all this, I am pretty sure that there’s a lot of people out there, especially those of my age, who feel the same. Now this bastard celebrates its 40th anniversary! Happy birthday, “No Sleep ‘Til Hammersmith”! To celebrate this anniversary, we have a new special 2 CD edition of the album. Of course we get the complete original album, well remastered and in all its glory on the first disc. And this disc features two well known extra live songs as well, who were already featured on the first CD edition of “No Sleep…” in 1996. ‘Over The Top’ was from the same series of shows in March 1981 that were used for the album and saw the light of day as the B-side of the 1981 live 7” of ‘Motörhead’. And ‘Train Kept A-Rollin” was recorded in 1980, probably at the same series of shows as the version of ‘Iron Horse’ used for “No Sleep…”. The other recordings on the first disc are absolutely rare and haven’t been released before. It features about twenty minutes of material taped during the soundcheck of the MOTÖRHEAD show in the Newcastle City Hall on March 30, 1981. While ‘Stay Clean’ was played through straightly, ‘Limb From Limb’ was started twice and featured some mistakes as well. It wasn’t perfect and maybe that’s why it wasn’t played at the show later. And ‘Iron Horse’ was also played more often during the soundcheck, sometimes the tape started to run in the middle of the song. It might be interesting for the completist, in my eyes it is pretty interesting to listen to once. But not for a second time. Yet the most worthwhile extra of the 40th anniversary edition is the second disc that features the complete and unedited recordings of that show in Newcastle at the City Hall on March 30, 1981. The listener has the chance to witness a whole show of the classic MOTÖRHEAD line-up: nineteen songs, 73 minutes of the heaviest Rock’n’Roll ever. Seven of the songs here didn’t make it onto the original album (including the single B-side), so we have rare contemporary live versions of songs like ‘Shoot You In The Back’, ‘Jailbait’, ‘Leaving Here’, ‘Fire, Fire’, ‘Too Late, Too Late’, ‘Bite The Bullet’ and ‘The Chase Is Better Than The Catch’. And believe me, it’s a real joy to listen to this show, as the sound quality might be a little unpolished and not every note is played perfectly, but it’s a real contemporary document that catches the energy of MOTÖRHEAD in those days in a fantastic manner. So, this 2 CD pack is really a fine buy for both people who don’t own a copy of “No Sleep ‘Til Hammersmith” yet and those who need an expanded version. For the real fanatics, there is a box set that features not only some gimmicks like a plectrum and replicas of a tour pass and a show ticket, but also two more CDs as well. These feature the complete shows of the two days prior to the one on this double disc: the first show in Newcastle on March 29, 1981 and the show in Leeds on March 28. Both have the same track list as the second Newcastle gig except for ‘Iron Horse’ that was only played on March 30. And for vinyl lovers like me, there will be a triple LP with the original album (minus the bonus tracks) and the full Newcastle gig spread over two vinyl records. In case you still need information on MOTÖRHEAD visit www.facebook.com/officialmotorhead and leave a “Like” if you still haven’t yet. For more on this anniversary edition, visit www.bmg.com