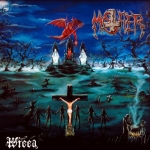 Perhaps this isn’t a word one may expect to see associated with Brazil’s legendary MYSTIFIER, but I can’t help but find them, particularly 1992’s “Wicca” utterly serendipitous. Sure, it’s a more flowery word than I was aiming for, but, let’s face it, words tend to get buried especially when you play music this fast. Bassist and guitarist, Beelzeebubth, intended to play music that would express his distaste for Christianity, a path not entirely novel for Metal, yet it was the resulting pathos that carries the heart of this band. In a genre riddled with iconoclastic imagery and themes such as a mutilated religious icon, a holyman covered in semen, it can almost become expected as merely part of the aesthetic. Such extremism is just another element in the theater of many extreme bands; it contributes to both its zeal as well as its humor and it is sometimes an appeal to absurdism. Alternatively, MYSTIFIER exemplified a deeply-felt level of repulsion, a sound that communicates alienation over wholesale hatred, estrangement rather than mere dismissiveness of religion. Stylistic features, rather than words, inspire empathy in the listener as general disgust is transmitted through ominous bass lines, inhuman growls and an overall sense of uneasiness. Rather than shock, MYSTIFIER seeks to embody the same unsavoriness as their Christian foes by stripping it all down and uncovering it for all to see. In doing so, they have avoided merely being preachy in favor of becoming, or at least what I like to think, masters of horror. Perhaps one of the most painful realities in life is accepting that nightmares aren’t real. The byproducts from the bowels of our minds, the darkest corners of our imagination that once left us so utterly terrified and confounded are now replaced by actual woes of grief, loss and mediocrity. Most of the stylistic intentions of MYSIFIER are to bring these elements to life and bring fear and despair back to context with fantasy and mythos. “Wicca” is perhaps the strongest example of this in their career. Elements of mysticism accentuate the frenzied pace of their sound. ‘Osculum Obscenum’ exhibits this as the song begins a bit slower featuring uneasy guitar melodies and bass that comes across as almost foreboding before launching into disorienting cacophony. The vocals approach inhuman, alluding to anything from demons, dragons and sometimes dogs, as represented almost unsettlingly in ‘Hyoscyamus Niger’. There are often layered effects where it sounds like multiple voices emerging from one orifice in a masterful demonstration of terror and disconcert. The appeal of MYSTIFIER lies in these details, sure, but there are also portals of entry where we can find ourselves at home in their alienation, a proverbial trail of breadcrumbs if you will. Ever-present in this album, there are the more classic Death Metal guitar solos and squealies that reassure us of the music’s intended purpose; they are the loophole to the seriousness and intensity of the band. The horror elements extend to the full-on cinematic in tracks such as ‘(Invocacione) The Almighty Satanas’. Sound bites and menacing growls open and continue to embellish the entirety of the song. Some tracks are enhanced with keyboards that only contribute to the album’s eerie theatrics. All of these qualities secure MYSTIFIER as a true Metal classic, whether you regard it as early Black Metal, Death Metal or any other manifestation, there is a lot of heart to this band’s strong admonitions and this is, in fact, their main tactic to express feelings of distrust and suspicion. I suppose this is where the punchline about serendipity should come in, however, it’s a lot less airtight and apparent than I originally thought, but hey, I wouldn’t be the first to set out to do one thing and achieve another. As if their sound wasn’t generous enough, this re-release also includes two bonus tracks (‘Ancient Prediction (My Eternal Nightmare)’ and ‘The Sign Of The Unholy Cross’) and a bonus DVD which includes two live shows: Live at Nuclear War Now Fest Vol. II in Berlin, Germany on November 19, 2010 (8 tracks, 36:47min) and Live in Salvador on November 16, 2009 (9 tracks, 42:50min). These are a treat, much like most things viewed in retrospect because the best days are already behind us anyway, right? www.mystifier.com.br, www.facebook.com/mystifier666, www.greyhazerecords.com 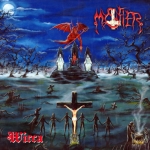 Sometimes things are better left untouched. Sometimes. When a band decides to have another chance at their early material, in the way of having a good mastering or mixing slightly again (rather than doing full re-recordings which most of the time turn out to be a big pile of crap) things can turn out to be good. I am usually a fan of leaving things as they were in the first place. It has some kind of “magick” to do it like that, like a testament of a time long gone and where things were what they were. In the case of the debut album by Brazilian Metal mongers MYSTIFIER, the remastered version does improve the guitar sound a little bit, yet I think the drums are sounding more “plastic” than on the rawer original version, but then again that is just me and my old ears. If you have not heard about this band, well, they are the spiritual inheritors of the SARCOFAGO essence from their debut “INRI” and in fact the album sounds a lot like that one. At least for me that is not a bad thing, as one can sense that atmosphere of darkness only South American bands can possess. Yes, the drum sound is weak, some tempos are really screwed, but alas, that adds the charm to a 23 year old album. Included in the second CD is (besides the original version of the album) the EP “The Evil Ascencion Returns”. I am a bit confused as I have seen this album re-released like by thousand labels, but it is good that it is available for the new generations to degenerate. And I must add that they are still playing live, and they are an entertaining band if you have the chance to witness them. I just wish they are to release some new material to hear what are they up to now. More info at: www.facebook.com/pages/mystifier/222621304428768, www.hammerheart.com