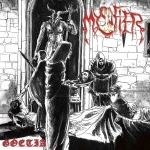 Black Metal heroes MYSTIFIER have probably (besides SARCOFAGO and VULCANO) released some of the best material to ever come from the early Black Metal scene in Brazil. Obviously that the term Black Metal is used here as it was supposed to be in the early 90s. And with the South American touch only the hordes from that place can add. “Goetia” from 1993 is the second album from the band, and for many, their best. The production values are better than their debut album, and also the band plays better. There is a strong evil Thrash Metal influence from the likes of early SODOM, HELLHAMMER, KREATOR, VENOM and BATHORY. Some Death Metal is also to be found here, with touches of MORBID ANGEL, DEATH and POSSESSED. Originally released by Osmose Productions, this has been available in many editions, one of them a giant digipak including the debut “Wicca”. Now, this re-issue includes a few bonus songs live, which are interesting but they add nothing more to this already classic album. The band is active up to this day, and has played quite in a few places. I was able to witness them live (a show that has been just released in a great DVD production) and I can say that the band has a very good live presentation. I have heard things that live Beelzebuth (founder of the band and who started playing bass) could improve his guitar skills, and that might be true. But in this recording, the members that executed were up to the work. They were one of the few bands that used keyboards but with the right amount of it. An album that up to this day has aged quite well, and is without doubt their best material. As good as “INRI” and that is already saying something. www.facebook.com/mystifier666, www.hammerheart.com, www.greyhazerecords.com