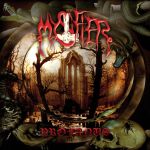 Released a few years back, this is without doubt the best work of these crazy Brazilian Death / Black Metal mongers. Although MYSTIFIER are more known for their bestial, raw and demonic style of their early recordings and first two albums, there is no doubt this is their most mature release. Previous to this album the band decided to do some sort of “experiment” by adding some clean opera style vocals to their extreme Metal sound in the album “The World Is So Good…” that turned out to be rather a success than a failed attempt and it was done with good approach and although sounding weird, it added more to the music. It also had a more Heavy Metal – esque approach in songs, melody and song composition itself, as opposed to the evil early assault that was more akin to their land-mates of SARCOFAGO, SEPULTURA and their heroes SLAYER, KREATOR and BATHORY. It seems all that experience is put in use here. No more opera like vocals, but some traditional Heavy Metal guest vocals here and there (and done in a rather good way I must add). And the most significant change is the use of very good guitar solos (all done by a guest guitar player) thus giving it a more Death / Thrash approach yet still maintaining the Black Metal roots of the band. This was the last thing ever the band has recorded so far, but they are still playing live quite a lot in fact. Having witnessed them (in the show of their only official DVD release) I must say that they are more into playing early songs, but it should be a good idea to have some of their last two albums as they are surely very interesting. I am afraid that they will need to use another guitar player as band leader and founder Beelzebubth is not really a soloist. Although the bonus songs do not that much for me, this re-edition is worthy alone for the material and I hope that if MYSTIFIER decides to record something new, they would do so with the essence, aura and maturity they have found in this album but taking also elements of their early works. www.facebook.com/mystifier666, www.vicrecords.com