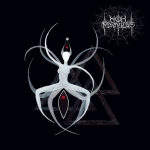 Quoting their label Dark Descent’s bandcamp page, "Nox Formulae is an emanation of the well of N.O.X, the darkest aspect of the Draconian / Typhonian Principle which applies to the mystical Black Magical Formula of XONOX”. I have no idea of what that means, but it certainly is strange and that’s exactly how the music of NOX FORMULAE is: strange! This review was probably one of the hardest to write, because I honestly didn’t know what to say after the first listen. To tell you the truth, I didn’t like the album after listening to it the first time. After a few listens, some things started to make some sense and the album seems to grow every time I listen to it (and I’ve done that a lot until now, trust me). Coming from Greece, you would probably expect a Black Metal band with a major melodic influence, which is not the case with NOX FORMULAE. They’re building their own path within the Greek Black Metal scene, by combining Black Metal with atmospheric and avantgarde elements, but also some parts of the 80s Gothic scene. The spoken words vocals are, in my opinion, a clear example of that. Some parts even remind me the legendary BAUHAUS. Just listen to some of the guitars on “Voudon Lwa Legba”, for example. The overall atmosphere of the album is amazing (once again, give it a few listens) and the production fits like a glove on it. More information at www.facebook.com/noxformulae, www.darkdescentrecords.com