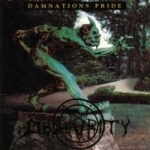 Yeah, I know that this release is already pretty dated by now (it already came out in 1998), but due to the fact that the nice people at Scarlet Records have kindly supplied me with a copy of it just most recently, I’ll return the favor by giving it a mention here. The recordings are timeless anyway, so… OBSCURITY is one of those real cult acts that never really made it big, but whose name still gets spread throughout the underground for quite a while now. Along with MEFISTO and MORBID they used to be one of the forerunners of the extreme Swedish Metal movement in the mid eighties and certainly built up a foundation that was later on solidified by GRAVE, TREBLINKA, NIHILIST, CARNAGE etc. and kinda snowballed from there. But unlike all those bands, OBSCURITY were never pure Death Metal, but an extremely raw Thrash band. Sometimes as chaotic as early VENOM, always as aggressive as early KREATOR and mostly as primitive as old ONSLAUGHT. This album features their two classic demos "Ovations To Death" (from 1986) and "Damnations Pride" (1987), as well as a rather disappointing untitled two song demo from 1992, which is a lot weaker than their classic material. It might be a little difficult to get into OBSCURITY nowadays if you don’t know them from back then (as the recording and playing quality by no means lives up to the standard of today), but if you have some historical interest in the evolution of extreme Metal and listen really carefully, you’ll easily notice OBSCURITY’s real class. There’s certainly been a lot more feeling, honesty and dedication involved in their songwriting than in the perfectly produced and unoriginally performed, faceless stuff that comes out these days. The CD features some old pics as well as all the lyrics to the songs. So, even if you already own the demos or the 7"es (that To The Death Records made of ’em a couple of years ago), this is still a fine release that you should seriously consider buying.