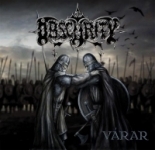 Sometimes, I do have the feeling that there are a few brave enough to dare to create music, yet they refuse to have a big audience… whereas most musicians’ dreams are to become big and famous, some more are just pleased with having the freedom of creating music. Enter OBSCURITY from Germany. On “Várar” they are actually doing their fourth full length. And even now, they are quite unknown. One reason might be the fact that it seems they are doing all their songs in their native tongue. Other as well might be the countless releases done every year. Labeled by their company as a Black / Viking band, I do listen to very little Viking sound on them. In fact, I do think that they are labeled as “Viking” merely for their sound which is quite near to that of AMON AMARTH, yet having some different approach. Whereas the Swedes are more melodic Death (with Viking tales that’s it) OBSCURITY goes more for a melodic Black Metal approach (think DISSECTION and SACRAMENTUM). This recording does possess a crunching guitar sound, a very competent rhythmic section and above average vocals. There is also an unmistakable Thrash / Heavy Metal approach which sometimes reminds me to the early IN FLAMES sound (circa “Lunar Strain”). So, it is well played, it is well recorded, has some sort of “Viking” flavor, and a lot reminds to the Mount Doom mongers, like the song ‘Worringen’ sounds could be a cover from “Versus The World”. I enjoy this one, but then again, it all sounds a bit predictable and damn, too much like those bearded Swedes. I think there it lays a weak point. Whereas the Swedes have perfected the style, OBSCURITY tries hard to make it theirs, by adding some Black Metal touches. In fact they did sound good in songs like ‘Schutt Und Asche’, but then again it is hard not to think in the now famous Swedish quintet. Fans of AMON AMARTH will definitely praise this one. Casual Metal listeners will find it interesting. Even die hard fans of extreme Metal cannot at least appreciate some good qualities here. And to these ancient ears it does sound more like “Pagan” than “Viking”… oh well, what I know, that is supposed to be related to the lyrics and my German is way too rusty to make out more. Let’s keep the title of the second song ‘Battle Metal’ and we will all be satisfied. Oh yeah, I was also thinking about the Swedish OBSCURITY at first… so no, related to some other Swedes, yes and a lot, but not those old demomongers. Ah, whatever, it does deserve at least you to give them a listen. www.myspace.com/obscuritybergischland, www.trollzorn.de