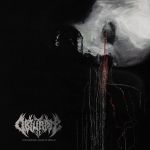 ob-tuh-reyt – ‘to stop up; close’. OBTURATE members – Phobos (who plays all instruments and provides vocals)… Everything seems simple and straight to the point. And maybe that’s what we need in our Death Metal. Because, in all honesty, we really just want to rock out and let off some steam. And "The Bleeding Mask Of Dread" is the album to do just that. The first time I listened to this album (which is their first full-length with no prior demos or EPs), I had no idea one man did it all. It has a band feel to it for the most part. ‘Blue Marks On Her Neck’ starts off the album at breakneck speeds. The melting, churning guitars and gravel-crushed vocals parlay with the amorphous drumming to mold into a hell of an opener. ‘Unknown Breed’ keeps the blood pumping through your veins as ‘Under The Ninth Moon Rain’ settles in to a more traditional Metal sound. The galloping guitars in ‘On Your Corpse I Spit’ conveys the disgust the protagonist must obviously feel. There’s a slight newness to this music that breathes new life into an over-three-decades-old art form. In your face riffs and off-kilter drumming smack the shit out of the listener’s face on ‘Within Their Throat’. Song titles like ‘Scarlet Stains Upon The Bodies’ (a fast-paced number) and ‘Bloodbringers’ (which sounds like a horde of marching insectoids) bring the band into the forefront of new bands carrying on the tradition of Death Metal damnation. ‘Obsidian Wrath’ reminds me of a swarm of vengeful wasps which leads into final track ‘Wear That Flesh’, a song that morphs and mutates as it progresses. For a first album, and a one-man band at that, OBTURATE has delivered a damn good package. It’ll be interesting to see where Phobos takes us next in his Metal journey. More info at: www.facebook.com/obturate.death, www.facebook.com/bleedrecords