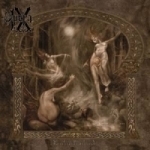 OPERA IX have gone a long way release wise since this obscure Italian Black / Gothic Metal band took its first baby steps in the Italian underground Metal soil. Since the band lost their unique sounding female vocalist Cadaveria after the 3rd album titled "The Black Opera" in 2000, the band seemed to loose a few loyal followers as well. Also the band’s music changed slightly; for some perhaps even too dramatically. But they kept going on, founding Marco DeRosa (also played in many other acts) to replace Cadaveria in the vocal department. OPERA IX’s next couple of albums, "Maleventum" (2002) and "Anphisbena" (2004) weren’t received that well amongst the fans of the band but we really cannot blame them, after loosing such a magnetic character of the band. 8 long years passed by, and the band’s 6th album, "Strix – Maledictae In Aeternum", saw the coming of darkness. With a few unprejudiced rounds, I must say I am surprised how good this record actually is as wholeness. I can recognize some slices of the same musical elements that this Italian bunch delivered on the somewhat classic 1995 debut album of theirs "Call Of The Wood" – as well as on their 2nd opus, "Sacro Culto"; that being released 3 years later from that – in 1998, OPERA IX bending quite a few sub-genres of different Metal styles into one, mind-provoking and pummeling listening experience on "Strix". The band’s main emphasis is clearly on complex yet challenging song structures; you cannot take anything for granted when listening the songs of "Strix". The record seems to surprise every time when you place it into your CD-player – and start playing it, revealing more and more new details out of its dark and mystic content. It’s doomy – it’s symphonic – it’s haunting – it’s spooky sounding – it’s raw and ear-shredding… it’s all there, giving you more than just a couple of good reasons to say you can really like this record for what it is. Yes, it’s still OPERA IX but without Cadaveria’s vocal presence. The latter fact is not something why they should be ignored but more like accepted because at the end of the day, "Strix – Maledictae In Aeternum", is a pretty strong record all in all even if slightly lacking in the originality and uniqueness of their old days. www.operaix.it, www.agoniarecords.com