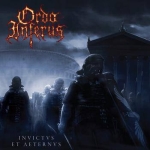 Last years “Damnati” EP from ORDO INFERUS was one of the fine moments that proved that the contemporary Death Metal scene is alive and well. Even more, merited valiants start off with new bands, like in this case of unswerving devotion to the Metal of Death. Somehow depicted as a supergroup, ORDO INFERUS needed just twelve minutes to show the Death Metal world of which wood they were cut. The participation of Hempa Brynolfsson, Tony Freed and Janne Rudberg Björkenfjäll already promised great things to come. In the mean time the once intercontinental band became a pure Swedish one due to the departure of FUNEBRARUM’s Daryl Kahan, yet this doesn’t mean any change. Also the change on lead guitar from Martin Halfdan to Sebastian Ramstedt has no audible effect on the sound of the band. And thus the announced debut full length of ORDO INFERUS is ready to be unleashed upon us. “Invictus Et Aeternus” is here to tell the dark stories of the ancient Roman Empire, the stories of decadence, punishment and bestial entertainment. Fitting to this lyrical background, all songs titles are in Latin language, even though the lyrics are in English. Musically, the “Damnati” EP set the bar high for “Invictus Et Aeternus”, but the fact that two songs from that EP are on the album as well (‘Demonized’ was renamed to ‘Daemoniatus’) indicates a high level for “Invictus Et Aeternus”. And ORDO INFERUS don’t have any difficulties to reach that level. As soon as the intro ‘Sub Imperio Prolapso’ has passed, ‘Lingua Silentium’, the language of the silent, screams loud with dense, brutal riffing and fuckin’ fine grooves. The following ‘Io Saturnalia’ strikes with the same sword, yet this blade is even more sharp. And ORDO INFERUS keep up a damn high standard throughout the whole album. Yet, they don’t forget to accelerate when it’s needed (‘Damnati’) or give the listener a short break, like the acoustic interlude ‘Antequam Porta Aperiatur’. And there are more brilliant songs to be discovered like ‘Decimatio’, a groove machine in the vein of the mighty BOLT THROWER. And the mighty crusher ‘Rhea Ilia’ even is the topping of the album, using some classic Metal influences in the guitar work, thus creating a monster of a song. ‘Daemoniatus’, of course, still rules as much as on the EP. The pretty raging ‘Servi Domini Veri’ and the a little too long outro ‘Saturnum Salutamus’ end up a fine and flawless album that sets a bang in today’s Death Metal. Check ORDO INFERUS: www.facebook.com/pages/ordo-inferus/373896722727651, and the label: www.doomentia.com