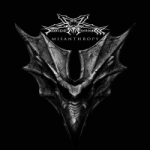 There is a giant gap between the years 1994 and 2004 in the PANDEMONIUM discography. However this is not because the band split up and reformed in the mid 2000s like many others did, and still tend to do – but because they changed their name to DOMAIN in 1995, and, in 2004, apparently experiencing a change of heart, reverted to the old name, PANDEMONIUM, and have continued thus ever since. “Misanthropy” marks the latest installment in a two decades long history of Death Metal. Unfortunately for me this is my first introduction to PANDEMONIUM, so I’ve no idea how this album holds up to older ones. But that aside, I’m confident fans of the older material (whatever it sounds like) can appreciate what’s on this album: polished, but punishing Death Metal. There are some melodies I’m not fond of, such as the mid-part of ‘God Delusion’, but nothing to prevent me from listening to it all the way through, for the rest of the song more than makes up for it with heaviness and a scorching infernal spirit. In a balancing contrast to blast beats and all out speed, songs such as ‘Necro Judas’ and ‘Stones Are Eternal’ plod along with a dirge-like steadiness. Then, changing the mood once more, ‘Avant-Garde Underground’ roars in with an undeniably catchy riff and becomes a unique mix of Thrash, Black and Death Metal such as I do not often hear. The rest of the album continues much in the same vein as the first few tracks, except there’s an obvious nod to bands such as NILE in the melodies. This is really good Death Metal, everything you would expect from Poland’s heavy roster of bands. www.pandemonium.metal.pl, www.facebook.com/pages/pandemonium/154109541281238, www.paganrecords.com.pl