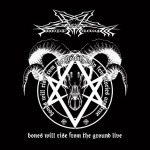 The old Polish Black / Death Metal band, going strong since 1989. This is a compilation consisting of 5 songs recorded from 2012 to 2015 including a BATHORY cover version. And it is complemented with another 9 songs recorded live. Their style has remained almost intact since I was reading from this band in old Polish fanzines I traded with: mid paced but intense Death / Black Metal that recalls early SAMAEL, the slower parts of MORBID ANGEL, the avantgarde era of CELTIC FROST (but still Metal!) just to name a few. Also, they play with a lot of passion and are always aiming for the best quality possible in their compositions. The live part of this compilation sounds like that a fan would record in front of the stage, it sounds good for what it is, although the guitars sound a bit lower than what they do sound usually in the studio. Yet, one can listen to a very good performance. Still, what we the fans are waiting for is a new album, so hopefully this is just a teaser for things to come. www.pandemonium.metal.pl, www.facebook.com/pandemoniumpl, www.oldtemple.com