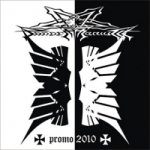 These Polish veterans were already founded in 1990, changed their name to DOMAIN in 1995, but changed it back to PANDEMONIUM in 2004 after some legal disputes. They’ve built a decent discography and their 1992 demo “Devilri” from 1992 is considered classic by some. At that time, the pretty unknown Polish underground was already blooming and found a channel to the rest of the world by the awesome Carnage Records. Times have changed, but not the quality. On this promo the two tracks ‘Black Forst’ and ‘God Delusion’ are unofficial versions and a teaser for the upcoming album “Misanthropy”. The production is fat! Recorded at the Black Bottle Studio in Torun, the sound is clear, but above all heavy, warm and thick. The Black / Death PANDEMONIUM unleashes is labelled Satanic Dark Metal by this band themselves and sounds like a slow yet powerful version of ANGELCORPSE, BEHEMOTH or THRONEUM with a Scandinavian Black-touch. The speed is found in the double bass but this gives room to a natural brutality. Everything just seems ok… the songwriting is excellent, the musicianship top notch and the atmosphere haunting with such a right combination of heaviness and melody that it made me wish that many, many more bands would be of this same caliber. Eventhough they’re the same as on their previous album “Hellspawn”, the grunts let me down (they reminded of ACROSTICHON). Maybe they suited the nasty sound of “Hellspawn” better or it’s just a matter of taste, but they were lacking the power that’s around everywhere else here. The screams suit much better. Apart from the vocal problem and some tiny, weaker melodies, it’s real powerful and intense. For example, the awesome leads and possessed vocals in the ending of ‘Black Forest’ are simply great! In the end I recommend you to keep an eye on the following on “Misanthropy” and check this out. Besides these two tracks, this promo contains 9 video tracks (running 20 minutes) from both PANDEMONIUM as DOMAIN shot at the Metal Time Festival (August 21, 2010) and Od Nowa Metal Fest, Torun (October 23, 2010, great sound!) plus a concert video. Too bad three of them are intros. Better had those been skipped for real tracks! Tracks are ‘Asaku Marsuti’, ‘Dingir Xul’ (both from DOMAIN’s “Gat Etemmi”), ‘Unholy Existence’ (from “The Ancient Catatonia”), ‘Hellspawn’, ‘Hypnotic Dimension’ and ‘Frost’ (all from “Hellspawn”), overall quality is cool and form a nice bonus. Another strong one from these obscure warriors! All further info at www.myspace.com/pandemonium_pl, www.myspace.com/rammstahl