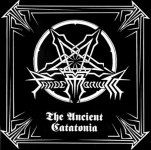 Believe it or not, but I still own a cassette copy of the first PANDEMONIUM album "Devilri" which gained a cult following after it was released back in 1992. I clearly remember when they were called Poland’s answer to SAMAEL and this comparison was really justified – mind you, it wasn’t a blatant clone, but rather their own interpretation of Satanic Dark Metal. It wasn’t Death Metal, it didn’t completely fit into the Black Metal category as well, but it was dark, majestic, powerful, deppressive and fucking heavy. "The Ancient Catatonia" album followed two years later in 1994 and somehow passed me by completely. Or most likely I was onto other things musically, so it was really cool to discover it as a re-release on Old Temple Records 20 years later. It comes untouched by any modern fix-ups or remastering, just pure old school sound from 1994. Total nostalgia and analog vibes, yeah! It pretty much builds on the foundations of "Devilri", adding more dark melodies and slower passages, I bet the guys by then studied first PARADISE LOST, WINTER and MY DYING BRIDE albums, so those influences are there as well, but with very distinctive and dark PANDEMONIUM stamp. It’s strange how an album released twenty years ago, can sound so fresh and original today, the melodies and riffs are enveloping you in devilish splendour and the whole affair is way slower than "Devilri", the tempo is mostly mid-paced, rarely picking up to add some variation. If you only heard the latest PANDEMONIUM releases of the 21st century, you’ll be surprised how completely different the band sounded and played back in the day, but if you love old SAMAEL, ALASTIS and VARATHRON, then be sure to add "The Ancient Catatonia" to your collection, it’s a masterpiece from the golden era of Polish underground! For more info: www.pandemonium.metal.pl, www.facebook.com/pandemoniumpl, www.oldtemple.com