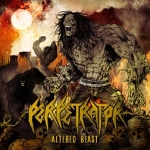 Not altered but still a beast, the new full length of PERPETRATÖR from Lisboa, Portugal. Compared to their first album "Themonuclear Epiphany" and the split with HELLBASTARD from the UK, PERPETRATÖR didn’t really develop or change their style of mass attacking Thrash Metal. This doesn’t imply that they don’t rock like the ocean on Portuguese coastlines. They do! They just seem to have a clear concept of their music. Come. Plug in. Destroy. Leave. A concept I wish more bands would undertake. "Altered Beast" is a fast thrashing, melodic, Punk stench exhaling record. What seems like a simple idea is way more then just galloping drums and attacking voices on simple riffing. PERPETRATÖR use their skills to provide a range from Death Metal like disharmonic riffing to Heavy Metal influenced solos. This record gives a fuck about new area style. But manages to provide a wide range of styles and ideas to create something in-between which gives you a chance to drown, explore and determine Thrash completely new. This record will fuck you up in every conservative idea and force you to redefine your idea about Thrash. Check it and bow down! www.facebook.com/perpetratorthrash, www.cavernaabismal.com