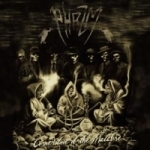 Here they are again, my dear friends from PHAZM – I really enjoyed their debut “Hate At First Seed” several years ago due to the special atmosphere and even if I missed their second release via Osmose Productions didn’t I expect anything else than a really good album far away from the normal business understanding of Metal meets Rock’n’Roll. The new album is a kind of musical adrenaline and my head starts automatically with a very characteristic up and down movement when ‘Love Me Rotten (Love My True)’ opens the wild ride of “Cornerstone Of The Macabre”. The song is typical for the whole album – it’s on one hand a very powerful hymn, extremely catchy but also Death Metal to its core and I’m sure that it will stay in my head for at least several weeks. Another real highlight is ‘Welcome To My Funeral’ a more doom orientated song and a further proof of PHAZM ability to compose real neckbracking songs with passion but without the aim to conquer the fastest band of the world throne. Even some country music influences are no reason to ban this album because they are fully integrated in the concept of this release and they are furthermore showing that only the brave can still add something unique to this overflowing scene. Hopefully nobody will misunderstand these words, but PHAZM has released with “Cornerstone Of The Macabre” such a cool album that I can only bow my head to these lunatics from France. www.osmoseproductions.com