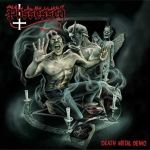 It seems like the re-release mania of old 1980s Metal classics and especially demo recordings from the glory days are at a new high right now. In the past few weeks, there were this kind of releases from ASSASSIN, DESTRUCTION and RAZOR, to name a few. Now we have the at least fourth re-release of one of the most influential demo tapes of the 1980s. I’m talking of the eponymous “Death Metal” demo that the godfathers POSSESSED released in 1984. And as important as this demo was, I still try to figure out if this re-re-release was really necessary. Of course we have the classic three raw songs that were on the original demo, i.e. ‘Death Metal’, ‘Evil Warriors’ and ‘Burning In Hell’ plus the omitted version of ‘Fallen Angel’ that was already included on all the other new versions. And we have a whole bunch of extras as well. The most interesting one might be ‘Swing Of The Axe’, that was taken from a tape POSSESSED recorded for record companies and ended up on the sixth part of the legendary “Metal Massacre” compilation series in 1985. Despite being well known (at least to us old geezers), this is, as far as I know, the first time that this version of ‘Swing Of The Axe’ was included on a POSSESSED compilation record. Next up on the 15 track disc, we have five songs (that were all properly recorded for the official albums) taken from a rehearsal room recording from 1984 that circulated in the tape trader scene of the 1980s. Those who knew these versions from the days of yore now have the chance to listen to them from the original tape and not from the eighth or eleventh copy of a copy. For all those who haven’t heard them yet, it’s important to know that the quality is very raw, unproduced and by far never meets any modern standards. Finally, this CD contains five more songs that were recorded live in 1987 at either Channel One or City Gardens. As contemporary as these recordings are, they are not more than bootleg recordings, taken directly from the audience, probably with a walkman like hundreds of other (not really legal) live documents of that era. Asides from two classic tracks from the “Seven Churches” album (‘ Holy Hell’ and ‘ Burning In Hell’), we also find three songs from the second POSSESSED album “Beyond The Gates”. With the same sound conditions, ‘Beast Of The Apocalypse’, ‘The Heretic’ and ‘Seance’ prove that they had similar qualities than the songs from the other POSSESSED releases, underlining that Carl Canedy did not do his best job when he did the production of “Beyond The Gates”. But returning to the question if the CD release of “Death Metal Demo” really was necessary, the answer should be: not really. It might be nice if you grew up with copied and traded tapes and missed the tape-and-vinyl box from Floga Records. That one featured the “Death Metal” demo, as well as the same rehearsal recordings and probably also the same live stuff, but with four tracks more. And if you still don’t know the old classic records from POSSESSED, you should rather check these out instead of this CD from Vic Records. For more info visit www.facebook.com/possessedofficial or the label www.facebook.com/vic-records-321130546025