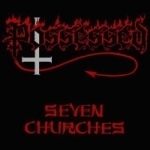 1985… I remember it like it was yesterday… a friend came up with a tape he got from a school mate. This was a copy of "Seven Churches" and this was the first time I listened to POSSESSED and from this day on I was a POSSESSED disciple… I totally loved this raw, brutal, mind-raping and aggressive piece of Metal and I still love it. Back then the reviews for "Seven Churches" often described the style as Hardcore or Thrash… but that was not perfectly suitable… in the 80s Hardcore was just a term for extreme music in general and for a Thrash band POSSESSED were too dark, too obscure, too eerie and too brutal. So POSSESSED also must be credited for founding and naming a new genre. "Death Metal" was the title of their 1984 demo and as far as I know this was the first time this term was used. Simply said "Seven Churches" is THE first Death Metal album and it is still one of the best Death Metal albums ever!!! Songs such as ‘The Exorcist’, ‘Holy Hell’, ‘Twisted Minds’ or ‘Death Metal’ are timeless anthems of unholy and aggressive Metal… I just mentioned a few songs but there is no weak or mediocre song on this album… every single track is a masterpiece. It would be a waste of time and web space to write more about the music… if you’re not familiar with POSSESSED you are definitely reading the wrong magazine!!! If there is one album in the history of Death Metal which is beyond any doubt a classic, a must have, a monument, a milestone and one of the most influential albums in Death Metal history then it is "SevenChurches"!!! And if there is one album which deserves a proper and worthy re-release then it’s also "Seven Churches"!!! This deluxe limited edition is digitally remastered, presented in a noble digipak picture sleeve that folds out to an inverted cross and includes seven inlays that can be folded to seven separate small paper churches, complete with a picture booklet containing all lyrics, sleevenotes, old photos and flyers. Gosh, the packaging is truly worthy and it looks really great… I don’t think that the digitally remastered sound is better than the original recording; it’s just a little bit louder and I really appreciate this because the original sound is good and should not be altered. I’m just a bit disappointed by the seven inlays… it’s way to complicated to fold them to churches… there are no folding instructions except for a demonstration video clip on the label website… Anyway, no reason to complain… everything else is just perfect. So even if you are the proud owner of a previous re-release I highly recommend you to buy this new version… it totally blows all other versions (especially the ridiculous first CD release via Roadrunner). www.centurymedia.com