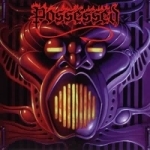 When I, as a young headbanger, returned from the record store as a proud owner of POSSESSED’s second opus “Beyond The Gates” back in the 80s and put the vinyl on my turntable I was blown twice… firstly because the music was so damned cool and secondly because of the amazing fold out sleeve… It opened like a gate and under the vinyl there was a picture of an eerie demonic landscape. Hellyeah, that’s the best LP packaging I’ve ever seen… Strangely enough back in 1986, I remember, many reviewers were complaining about the weak sound and that this is not a really good album… I absolutely did not agree with that opinion, not in the 80s and not today. Sure “Seven Churches is an album which can’t be topped but “Beyond The Gates” is a great piece of ancient Death Metal, no doubt about it. I liked the sound (okay “Seven Churches” sounded a bit more dynamic) and the songs… ‘Phantasm’, ‘No Will To Live’, ‘Seance’, ‘March To Die’ or ‘Tribulation’ could also have been on “Seven Churches”. In my humble opinion this album is such a must have and such an essential Death Metal classic such as the unholy debut. Just like “Seven Churches” this second re-release album comes in a great deluxe digipak edition. The amazing digipak opens like a gate just like the original LP release and contains a booklet with all lyrics and old photos plus a poster with cover artwork of” Beyond The Gates” on one side and “The Eyes Of Horror” on the other side. The only problem is that you have to choose which side of the poster you will pin on your wall… Hahaha… The “The Eyes Of Horror” EP is included as bonus on this re-release (like it was on the original CD release) is the last official POSSESSED release (I don’t count those early 90s demos). This EP contains the first POSSESSED song I’ve ever heard ‘Swing Of The Axe’, which was originally released on Metal Massacre part 6. This was really a killer song and I was kind of disappointed that it did neither appear on “Seven Churches” nor on “Beyond The Gates”. However, it finally was released on an officially POSSESSED release but I preferred (and still do) the raw version from Metal Massacre. Anyway, this EP kicks ass such as the older stuff of the band and the track ‘My Belief’ is another of my favourite POSSESSED songs. It’s so sad that POSSESSED disbanded after this EP. www.centurymedia.com