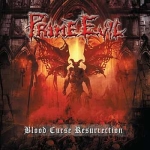 Sometimes, a band needs a second chance. New York’s PRIME EVIL is one of those who got their chance to start anew. Originally, the band started in 1984, released three demo tapes and a 7” on the tiny Rage Records label before splitting up in 1992. All this stuff is available on the hard to find “Unearthed” compilation from the year 2002. Guitar player Mike Usifer joined the ranks of DEMOLITION HAMMER afterwards, yet left the band before the recordings of “Time Bomb”. Nearly twenty years after the temporary end of PRIME EVIL, Mike Usifer and singer Andy Eichhorn re-started the band, originally in the longest lasting line-up. In the meanwhile, them two are the last original members and did an EP called “Evilution” as a duo in 2012. Now, with a fresh recruited rhythm section, they recorded the first full length album in the history of the band. “Blood Curse Resurrection” consists of ten completely new songs. And these songs are a feast for those who love their Thrash Metal with a distinct Death Metal bias. Like the aforementioned DEMOLITION HAMMER or the American SOLSTICE, for example, PRIME EVIL try to take the best of both worlds and they’re pretty good at this. Should be no wonder anyway, since they were one of the pioneering bands of the Death Thrash genre, walking between the worlds since 1988 at least. In the mean time, other bands occupied the throne, and there are more bands who claim the throne as well. But a furious Death Thrash tornado like "Blood Curse Resurrection" will for sure find its place in this world. Rude and merciless high speed monsters like ‘Blood Curse’ or ‘Plague Of Humanity’ are timeless fun and always a fine choice to smash the whole place. The same goes for the brutal mosh tune ‘Cannibal God’ with that little PANTERA vibe or the more mid paced crusher ‘Horns Of Rapture’. And with the furious ‘Strangulated Decapitation’, PRIME EVIL saved another highlight for the very end of “Blood Curse Resurrection”. If you want to complain about the short running time of the album, I can only answer you that half an hour of high speed is exactly the right dose. So, those who might dig a timeless bastard of Death and Thrash should check these links: www.primeevil.net, www.facebook.com/real.prime.evil and www.inferno-records.net