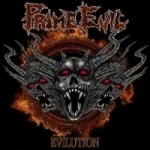 8 minutes and 22 seconds. It is just amazing how in 8 minutes and 22 seconds, a band can punch you in the guts, kick you in the nuts, spit on your face and still, you come back for more. Well, "Evilution", the new EP from reunited NYC Death-Thrash Masters PRIME EVIL does just that. Being a fan of the band since their demo days (I think their second demo, "The Manifestation" is a masterpiece!), and being disappointed by the fact that they never released an album, I was really excited when I heard that in 2011, the original line-up played a couple shows and that they were working on new songs. Now, this line-up didn’t last long (yet again) since Todd, Mary and Gary left the band before recording. But both, vocalist Andy and guitarist Mike recruited new members and released these 3 songs. And I can tell you, if you are a fan of PRIME EVIL just like me, well, this little EP is what we were expecting and more, much more. And to those new to the band the band, "Evilution" will make you all believers. Andy still has that thick growl, but it never gets tiring or monotone. His vocals are aggressive yet controlled and he is now using some high pitched screams to add some variety. And the music, oh, the music. It’s like it was 1990 again! The riffing is incredible, the bass is pounding and the drumming is perfect. Really, this sounds that good. It’s like "The Manifestation" on steroids. There is even some blast beat in ‘Evilution Decree’. The band is as heavy as a ton of bricks landing right onto your head! Production wise, the sound is crushing. The mix works well with these new songs, even though the mastering is a little too compressed for my taste. But anyway, this is some heavy shit! Now, I can’t really say anything else but PRIME EVIL is back with a vengeance. I just hope they can release their very much awaited album. And maybe they will mix some of their old material in there. That would be a dream come true! Listening to their new stuff, I know this new line-up can play the old songs just like they were meant to be, retaining that 90s vibe. Andy and Mike, thank you for coming back! You were just silent, but never gone! Hail PRIME fucking EVIL! All the info on the band and their new EP, released by Infernö Records, can be found on their official site and their label site as well: www.primeevil.net, www.facebook.com/real.prime.evil, www.inferno-records.net