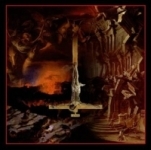 Hell, was anyone still expecting a new PROFANATICA album? I wasn’t, I buried my hopes after the release of “The Raping Of The Virgin Mary” had been postponed over and over again… And now, yezzzz, there is a new album, recorded from December, 24th 2006 – January, 6th 2007 in New York. So the expectations have of course been high and… I have not been disappointed. Surely it took some cycles to get into it, PROFANATICA have been away for “some minutes”, but I got into “Profanatitas De Domonatia” easily. It is still the primitive, raw Black Metal we are used to when it comes to PROFANATICA, Paul Ledney and John Gelso (obviously the two only remaining members) know so perfectly what they are doing. Unerringly they nail this 10 primitive songs into the countenance of this world and they succeed. This duo proves that music does not have to be extraordinarily fast, bad produced or similar “over the top” attributes, “Profanatitas De Domonatia” is extreme because the music itself (not the production or other negligibilities) is so utterly dark, an attribute I can not really certify many Black Metal bands with. Needless to say that this is an obligation for any PROFANATICA freak and serious Black Metal fan. www.myspace.com/profanatica, www.hellsheadbangers.com