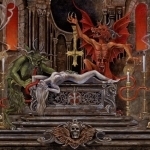 From the loins of INCANTATION birthed the twisted and deranged Black Metal project, PROFANATICA. If you’re thinking this is going to be a snowy, corpse-painted journey through some Norwegian blood-soaked basement, I’d say you’re only about half-right. This New York band is all about taking things to the next level while still maintaining the pillars of the Black Metal system of "beliefs". Crosses better be upside down, the vocals are abrasive and goblin-esque and the production needs that extra crunch. Beyond that, PROFANATICA likes to have a little more fun, American style. The puns and cheekiness are rampant and the lyrical themes as well as the overall aesthetic of their music and performances is turned up to a level of absurdity; their aim is blasphemy both in the traditional sense and even musically. Despite the extreme nature of their sound, they seem to have a healthy attitude towards Black Metal and use it for its often alienating and raucous qualities. Its influences become a component to the music as they incorporate intricate Death Metal riffs in their songs as well as grating bridges to create a rather disjointed assemblage of mayhem. ‘Foul The Air With Blasphemy’ is a rollicking track that features some welcomed guitar feedback in a rather unexpected twist before evolving into completely new riffs. The title track keeps a relentless pace throughout and features a Black Metal tremolo but feels meaner, heavier and even a bit more basement punkier than what is commonly seen in the genre. Among my favorites is ‘False Doctrina’, with its jarring riff and a bass line you can actually hear. It is sickening paradox of repetitious cacophony that has you following it the entire time only to be poked by sharp notes at regular intervals. The vocals remain pretty consistent throughout this album but I notice a bit more distortion on ‘Ropes Of Hatred’, which only seems to add to the sadistic qualities of their sound. The final track, ‘Water To Blood’ is perhaps the most fun with its various tempo changes and lightening riffs on a very balanced mix that has you notice key elements in an otherwise wall of sound. There is a steady rhythm you can follow, the vocals have devolved into mostly guttural sounds and the guitar accents and highlights the mood before descending into a melange of distortion. Metalheads beware, PROFANATICA knows they may not be able to scare your desensitized asses, but they can sure as hell taunt you and that’s pretty much what they do with this album. It’s insidious, uncompromising and slightly self-aware, which I find utterly refreshing in Black Metal or any Metal for that matter. If you’ve grown weary of the genre, I’d say this is an illustrious lesson in the world of difference attitude can make. www.myspace.com/profanatica, www.hellsheadbangers.com