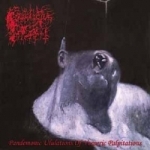 Welly welly well. What do we have here? Me thinks Hell’s Headbangers is batting 3 and 0 with this release. Another fine addition to the HH’s stable as PROSANCTUS INFERI conjure up a tasty CD with songs that at times remind me of a much better PROFANATICA (respect to them but they are not my cup of blood) with the same beats initially but then they take it higher and faster and then it gets blasting and then thrashing; then there’s but a touch of Death Metal then some War Metal seeps in to this deadly and intoxicating blood tea! It’s all very well played and interesting yet violent. And kudos for the production as all is crystal clear but not weak or too damn clean for its own fuckin’ good. No. It all comes out very damn well in the end. And the vocals… They are very subdued but not weak at all but rather they’ve a more evil and menacing aura to them contrary to a screaming banshee who’s telling you what they’re going to attack you with as opposed to PROSANCTUS’ vocalist who is hinting at your terribly certain impending doom! All the more chilling if you ask me. All in all a minor gem and one of the better releases of the year so far. I give it close to a 9 as the outro just fuckin turns me off after the 10 second mark but comes back nice and evilly at the end with some unholy guitar before it ends Buy it, download it, whatever floats your boat but do get this CD soon; it is quite tasty www.myspace.com/prosanctusinferi, www.hellsheadbangers.com