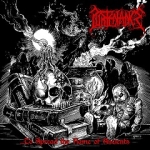 PURTENANCE
...To Spread The Flame Of Ancients
(Xtreem Music)
46:25min

Here we have another release by Spanish Xtreem Music featuring… surprise, surprise… Finnish Death Metal! Label boss Dave Rotten has had a soft spot for Suomi bands since back in the days when he started with Drowned Productions. Bands like CARTILAGE, ADRAMELECH, DEMILICH and even PURTENACE had been on their roster from the early to late nineties. Last mentioned existed during a short period from 1991 to 1992 and after releasing their classic Album "Member Of Immortal Damnation", they called it a day. But their paths should cross again just 20 years later when original drummer Harri Saro and original guitarist Juha Rannikko decided to give it another try and released an EP called "Sacrifice The King" via Xtreem Music. I was kinda sceptical, since I am not the biggest fan of such re-unions, because way too often these comebacks are just crap. And to be honest this EP was exactly one of these musical failures. It had nothing in common with what you had in mind, while thinking of PURTENANCE. So after a mediocre full-length with the yet promising title "Awaken From Slumber" in 2013, the northern horde is back on the map with their second full-length effort just about two years later. And what’s to say: just like on its predecessor you get the same uninspired and monotonous Death Metal here. Back in the glory days PURTENANCE stood for that typical dark and brutal Finnish sound with great growls, morbid guitars, twisted drumming and all the other beloved gadgets. I am not quite sure why people decide to play Death Metal again after an hiatus of 20 years, but already in 2000 IMPALED knew: "The Dead Shall Dead Remain". Referring to their actual album title, I’m afraid that, in case of PURTENANCE, the flame of ancients has gone out a long time ago. If you’re still in love with this distinctive atmosphere that only Finnish bands are able to create, I suggest you to try out acts like DESECRESY, KRYPTS, CORPSESSED or even the grinding Death heads in GALVANIZER and I bet you won’t get disappointed. This is the new breed of gloomy, brutal and very entertaining form of Death Metal made in Suomi. Don’t be content with average music, just for the sake of a name enjoying cult status, especially when the current band has nothing left in common except for two members from the olden days. That is not enough to survive in a scene being more vivid than ever, where great bands seem to pop up on a weekly base. Sorry guys, but maybe you should think of laying the old lady to rest instead of desecrating her over and over again with each further release. www.facebook.com/purtenance, www.xtreemmusic.com