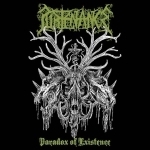 To become a legend is far more difficult than just what time gives you. Finland’s PURTENANCE have been dwelling for almost 3 decades now. And this, their last material released, is without doubt their strongest to date. Yes. Although they are considered among many to be sacred beasts of the Finnish Death Metal scene, and released a quite popular album with “Member Of Immortal Damnation”, I must say that neither then and not when they returned with new material in 2012, they were nothing more than a very competent brutal band and that’s it. And if I am not wrong, I have all of their discography laying around in my collection, so I found something interesting in them. Yet, nothing memorable, as some other landmates as say DEMIGOD or early AMORPHIS. But this new EP with 4 songs is their strongest material to date. The style has kept intact, brutal Death Metal that draws influences form INCANTATION, CELTIC FROST, POSSESSED and BOLT THROWER, yet I find the riffs more memorable, and although the low growl vocals are there, the overall sound makes this very interesting. I would say that maybe now I can sense more influence from the English War Metal Masters and that is just a very good thing. If the band keeps this same way, I will surely keep collecting what they release. More info at: www.facebook.com/purtenance, www.xtreemmusic.com