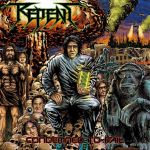 Are you morbid and nostalgic enough to take a trip down memory lane? In the event of an affirmative answer, REPENT will bring you back to the time when Thrash Metal was galloping hard towards its early copulations with some forms of more groovy Metal. I’d better explain my thoughts on this before you set your electronic device on flame to prevent it from getting the infamous mid-to-late ’90s Groove Metal infection. "Condemned To Fail" is basically a teutonic Thrash Metal attack in the vein of the 90s outputs of the all-too-mentioned 80s heroes. Get it? This means that there’s a plethora of tupa tupas mingling with winking frisky sections (as on the first bars of ‘Hypocrite’s Tears’ as well as on ‘Progress Paradox’), a reduced Hardcore percentage (‘Empires Of Evil’; by the way, notice the ‘Sweet Leaf’ induced delayed coughing) and a true obsession for the key of D minor (all songs). REPENT have been around for quite a long while: formed in 1992, their "On Your Knees" demo is as old as 1997. However, their approach is, once again, firmly rooted in what we might call "modern Thrash Metal" with some drops of the old school one. As far as the pure performance goes, REPENT sounds like a close-knit team of old Thrashbangers driven by passion and conviction. All instruments are played proficiently, harmonized solos break into the right points and all is well, (even much too) well positioned. Attention please: if you like your Thrash Metal evil as TRENCH HELL or ANTICHRIST (SWE), avoid this album or you’ll end up looking like the sad gorilla on the right corner of "Condemned To Fail"’s cover art. Visit REPENT’s digital moshpit here: www.facebook.com/repentthrash or check out www.hrrecords.de for records and goodies.