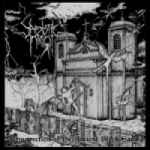 About eight years ago this compilation of SADISTIC INTENT’s two amazing mini albums “Resurrection” (1994) and “Ancient Black Earth” (1997) got released through Iron Pegasus Records for the first time. Back then it was a strictly limited, vinyl only release (666 copies, plus 100 picture discs) that quickly turned into a collectors item… As it also has become pretty difficult to get ahold of the original mini albums nowadays, this CD re-release is definitely more than welcome as the featured material easily stood the test of time and (even after so many years) still showcases SADISTIC INTENT at its best from start to finish! While the layout more or less has stayed the same (a couple of cool live pics, all lyrics and the original cover artworks), the tracklist differs a bit from the vinyl edition. The two additionally featured live songs ‘Eternal Darkness’ and ‘Ancient Black Earth’ got replaced by the two tracks from 2002’s “Morbid Faith” 7″EP now, which means that the band’s great co-operation with POSSESSED’s Jeff Becerra on ‘The Exorcist’ is finally available on a SADISTIC INTENT CD as well now (it was previously only out on the POSSESSED tribute CD). I just hope that the slogan in the booklet (“This was only the Calm Before The Storm… await the Second Coming!”) will one day finally turn into reality as every SADISTIC INTENT worshipper is still awaiting the band’s way overdue official debut full length for ages now! Nevertheless, this is a fuckin’ killer release that every fan of the band and Death Metal supporter in general definitely has to add to his / her collection! For ordering information of “Resurrection Of The Black Earth” get in touch with www.iron-pegasus.com, for updates on the band’s activities head to www.myspace.com/666sadisticintent.