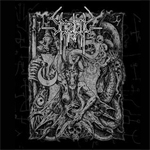 Two of the good old bands in the Death Metal scene, have been put together to deliver some madness on this 12" split LP from Iron Pegasus Records. I guess neither SADISTIC INTENT nor PENTACLE needs any further introduction, they have both roamed the scene since the late 80s and have always been churning out music of really good quality. The Dutch madmen in PENTACLE have been a good deal more active with releasing material compared to the counterpart from Los Angeles. SADISTIC INTENT are notorious for the time they can use to write, record and release music, and we are actually still waiting for the debut album, that has been in the pipeline for the last 25 years or so. We start off with two new tracks, or at least never before released tracks from SADISTIC INTENT, ‘Death Is Coming’ and ‘Numbered With The Dead’, two classic Death Metal rippers which are deeply rooted within the late 80s Thrash Metal scene. Quite nice energy in the output, good riffing from Rick Cortez, intense drumming and the classic vocals from Bay Cortez – if something sets you back in time, it is the music, feel and atmosphere from SADISTIC INTENT – they manage to capture the feel from when they started out as a band, again and again. The PENTACLE side of this release contains two tracks from the "Five Candles Burning Red" 12" that was released in 2014, the tracks are ‘Ritual And Darkness As One’ And ‘Pillars Of Black Flames’. Again classic mid-paced Death Metal from the Dutchmen, killer addictive riffing, hypnotizing rhythm patters and the trademark vocals from Wannes Gubbels, the legacy of HELLHAMMER lives on. A release worthy of your time, and perhaps a little teaser from the coming SADISTIC INTENT album? Though I said the same when I reviewed the "Reawakening Horrid Thoughts" EP, when it was released back in 2014, and nothing happened until this release, besides the band being quite active on the live-front, only time will tell. Much more info on the following pages of doom and destruction: www.facebook.com/pages/sadistic-intent/1477326789178713, www.facebook.com/pages/pentacle/86420806112, www.iron-pegasus.com