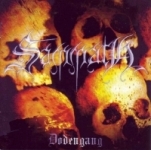 “Dodengang” is the third album delivered by SAMMATH from the Netherlands. Seven more or less long songs of fast northern styled Black Metal are offered here. Does not sound overly tempting one could say but luckily SAMMATH don’t follow the “Panzerdivision Marduk” formula. The drumming is definitely above average – tight, powerful and varied between massive midtempos and fast passages (which dominate, though). The guitars change between epic parts and fast violent riffing. I read that SAMMATH used to have quite a Death Metal influence in their music which is not really present riff-wise but somewhat gets across in the ways the riffs are played… if you know what I mean. One little detail that makes the songs special is the use of melodies that actually sound quite twisted, certainly adding an own characteristic to the “Dodengang”. The lyrical focus seems to be on war, maybe World War Two – at least song titles like ‘Imminence War Death’ or ‘Stalingrad’ give that impression. The vocalist delivers dry croaking Black Metal vocals which sound slightly “disgusted”. The bass guitar is not very present in the mix but here and there one gets to hear some distorted bass lines (like in the beginning of ‘Imminence War Death’). No big innovation to be found here but certainly very solid both epic and violent Black Metal without any pretentious aspects – be sure to check this album out if you like Black Metal with a martial atmophere but can’t get into War / Black Metal the bestial way.. The band’s self description, “furious Black Metal” sums it, actually. www.sammath.nl, www.folter666.de