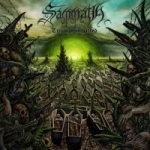 The triumph in hatred. The title sounds more like a statement rather than anything else. It might as well be both. This Dutch band started back in 1994, and they have kept faithful to their roots and style. Actually more a one man band which gathers musicians when needed, I have been following their career and their last album “Dodengang” is one of those releases that might not receive that much attention, but it has the quality few are able to offer nowadays. Let’s face it, SAMMATH is actually not doing anything new, they keep their Black Metal basics intact, while their Death Metal parts is still as present as ever, but furious as few can dare. If there is a way to describe their music, a mix between early EMPEROR and early MORBID ANGEL would prove precise. I would say that the Black Metal part is a bit stronger, but compared to previous efforts, the Death Metal part is gaining strength, specially the thick guitar sound, thus making it more interesting in this case. The band is wise enough to make their production to be raw and professional at the same time. I appreciate this effort to keep the raw approach, thus giving more identity to the band. Nowadays when everyone after a couple of years tries to have a clinical production, or on the other hand trying to sound so “true” that using a rehearsal-like sound seems correct, SAMMATH is wise enough to keep the right balance. There is also a good use of many Heavy Metal inspired solos, and the melodic aspect of the music is still present, no matter how intense this might be, not sounding forced or generic. There might be a few things that could be improved, mainly in the vocal section, which are strictly Black Metal style, and sometimes the drums are a bit lost in the mix, but overall, the stronger parts are way all over, so these details get somewhat lost in the final assault. I must mention the great cover art that is reminiscent of the early Death Metal albums, a back to the basic painted image with coffins, death and desolation. This piece of extreme Metal is available as a vinyl offering by Apollon Records while Folter Records will carry the CD version. Not only will I suggest to get both, but to also check the release in vinyl of the last album “Dodengang”, whereas the CD is still available by Folter. Hateful, melodic and extreme Black / Death Metal played with passion. That is something few can create. www.myspace.com/sammath666, www.apollonrecords.nl