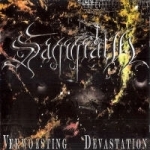 The Dutch one-man band SAMMATH was formed back in 1994 by Jan Kruitwagen, who originally used to grow up and live in Australia, until he ended up moving to Europe in 1989. Being heavily impressed by bands such as DEATHROW, CORONER, METALLICA and EXODUS as well as the new wave of Black Metal he quickly founded his own project and released his first promo tape "Visions Upon Winter Lands" in 1995, followed by two more promo / demos ("Zwaardbroeders Bij De Bergengte" in 1996 and "De Ruïnes Fluisteren" in 1997). Shortly after the release of "De Ruïnes…" Folter Records hooked up with SAMMATH and in 1999 the first full length CD "Strijd" finally reared its ugly head. I never heard any of those aforementioned releases, but from such a creative and experienced musical background, I definitely expected a whole lot more than what we get to hear on the second SAMMATH album "Verwoesting Devastation". First of all, there’s this rather strange guitarsound, which doesn’t do any justice to Kruitwagen’s mostly very fast’n’furious, over the top blackened Death Metal and by no means lives up to album standards these days. I mean, ok – even DARKTHRONE wrote history with a dirty sound in the past, but it was at least always really raw and had an overall very sinister atmosphere. This here delivers no atmosphere at all to me and rarely sounds raw or brutal. Then there’s the drum computer, which simply sucks beyond belief and should definitely be avoided in the future. The music in general is a mixture of fast Death Metal and harsh apocalyptic Black Metal, with a vocal delivery constantly changing from deep and brutal to the more aggressive, shrieky blackened style. I actually like the blacker side of SAMMATH’s material a lot more, while the Death Metal elements still come across very immatured sounding. The album closes with a decent KREATOR cover (‘Tormentor’) and also includes a videoclip for ‘Enter The Sadistic Nightmare’ (which almost exclusively consists of tons of black and white WWII footage). For his next release Kruitwagen definitely should turn SAMMATH into a full band and improve the production side of things – otherwise this will go nowhere. www.sammath.nl