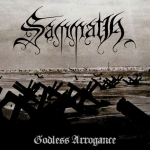 SAMMATH is doing it with what most bands today lack – balls. It’s doing what MARDUK did back in the day with its groundbreaking “Panzer Division Marduk” and showed people that it’s not all about the imagery and can stand head-to-head with its Death Metal peers in terms of brutality, so to speak. It’s not all esoteric and satanic crap, talks about the essence and all, shove it all aside. Not over here. SAMMATH from the Netherlands is doing it like few others are doing now. Only perhaps the US contemporaries like KRIEG are still at it, perhaps SATANIC WARMASTER and some Finnish bands. UK bands started out strong but are doing something else now. Enough. Coming back to SAMMATH, this is an incredibly powerful album. Smashing everything through your eardrums, glass shards and all. Think of the above mentioned bands crossed with early SETHERIAL, it’s got that definitive Swedish edge for sure. Bolstered by the MARDUK “Panzer Division Marduk” zeal. It’s virtually unstoppable. The vocals are grating shrieks in a way that’s extremely gritty and painful. This delivery stands out from the deeper style of Attila or Culto, this is something that’s keeping in sync with the pace of the music and its sheer aggression. This is Grindcore levels of intensity, blast blast but not redundant and not trying to be unnecessarily over-the-top, this has more substance than most bands trying to be like this. "Godless Arrogance" is a maelstrom of extreme music, whipped up to alarming levels. The Dutch are showing us how it’s to be done, SAMMATH and SAURON. This is a formidable album, unmatched in its intent in its time, a great feat. More information at: www.sammath.nl, www.facebook.com/sammath666, www.hammerheart.com