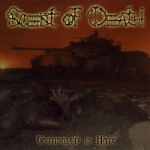 The Spanish Death Metal four-piece was founded in autumn 1998 and now after almost five years in the underground they come up with their debut-MCD "Entangled In Hate", which was completed in 2002. Musically SCENT OF DEATH orientate on complex, modern Death Metal à la DYING FETUS, GORGASM with screaming guitars here and there, twisted riffs and surprising song structures. The vocals are more old school in my opinion and remind me a bit of Mike Eisenhauer / EVIL INCARNATE, who uses some kind of whispered growls, if you can imagine something like that. Because of the rather unusual, dark and morbid vocals SCENT OF DEATH are able to create a certain amount of individuality on "Entangled In Hate" and a great song like ‘Feeling The Fear’ shows that SCENT OF DEATH are without any doubt a fascinating band, that deserves attention. One should be prepared for technical and brutal Death Metal assaults with a slight sinister feeling and a very cool, traditional production, when checking out SCENT OF DEATH. They are not the new masters of the genre, but a valuable new, talented band. In addition to that "Entangled In Hate" comes with a professional layout, song lyrics and so on. The band asks especially for labels / distros willing to support them, so please do it! Contact: Nuno Miguel Perez, Ntra. Sra. Do Viso 4, 2° lzq., 32005 Ourense, Spain Email: scentdeath@yahoo.es