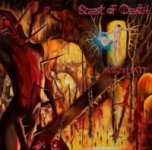 SCENT OF DEATH
Woven In The Book Of Hate
(Bloody Productions)
35:02min

It seems that the call for label support that Stefan included in his review on SCENT OF DEATH’s self-financed MCD “Entangled In Hate” ended up being pretty successful after all, cause in the meantime Spain’s Bloody Productions has picked up the band and released their first full length (after another company had to back off for financial reasons). Even though Mr. Franke already more or less seemed to like the potential of the MCD, it obviously did not entirely convince him yet. But I was nevertheless very eager to hear this debut album now as it got recommended to me from two different people almost at the same time… both mentioning a big IMMOLATION influence in the new material! And after I have checked it out myself now I can only confirm those statements! I’m not sure if the addition of vocalist Lois (who suprisingly came from the Black Metal band IMMACULA MORTEM!) is the main reason for the band’s obvious big step forward, but fact is that his extremely brutal voice often recalls the one of Ross Dolan. And that’s indeed meant as a very big compliment, as Dolan’s vocal delivery has without a question always been one of the best in the entire Death Metal genre! But also the songwriting on “Woven In The Book Of Hate” heavily recalls late IMMOLATION albums, with all the sick and twisted guitar pieces and apocalyptic sounding rhythm section. SCENT OF DEATH sometimes just seem to have a little more thrashier approach, but on the other hand also this rather typical MORBID ANGEL references (of whom they impressively covered ‘Day Of Suffering’ on this album!). Unfortunately the coverart looks a little cheap, but then again, the solid production of the record makes up for it. So, all in all Spain finally seems to have given birth to another great act to keep an eye on now! For more info check out www.scentofdeath.com or www.bloodyprod.cjb.net.