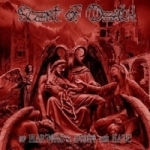 Second album from this band from Spain. My first thought was "Wow, a Tech-Death Metal band that is neither endless guitar wankery nor a drum fill fest or a bunch of riffs glued together." This band showcases an affinity with other exceptions to the "rule" such as (old) ATHEIST, AEON OF HORUS and SUFFOCATION. The ability and the musicianship to deliver technical proficiency is there, but retaining atmosphere and, above all, coherence. The production is everything you can expect from such a band: a thick guitar tone, an audible pounding bass and triggered drums. Execution-wise, all instruments fulfill their roles. These guys are excellent musicians. I just think the vocals, similar to old KATAKLYSM, feel one-dimensional at times, even though they do combine deep growls and high pitched shrieks. The mix is clear and punchy, adding an undeniable rawness to their overall sound. "Of Martyrs’s Agony And Hate" (with an spelling error included) feels like a ton of old bricks falling directly on your head, two at a time. Every song has a theme and each develop as they go on. Even the order of the songs enables the listener to follow the nuances in the album. Ranging from hyper blast beats to some slow, almost Doom-like passages, this one is a great example of well-done Death Metal with an razor-sharp edge. I have not heard their first album but SCENT OF DEATH have built an identity in a global scene full of copycats. Totally recommended if you dig the above mentioned bands or if you are looking for a slightly different approach to the genre. Highlight tracks, in my humble opinion, are ‘A Simple Twist Of Fate’ and ‘The Father’s Sins’. For more info on the band, you can go here: www.facebook.com/scentofdeathmetal, www.pathologicallyexplicitrecordings.com