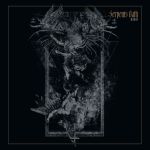 This is the debut of SERPENTS OATH, a Belgian trio that arrives in the scene with some flair. Theirs is a convincing argument, since this is an album that combines relentless brutality with accomplished composition. Even though they have several 90s Black Metal moments, stylistically they fall very much into the Black Death realm of bands such as DARK FUNERAL or NECROPHOBIC. The grandiose production of the album often brings the latter to my mind. After a layered intro of cinematic proportions, the album thrusts us directly into a full speed musical onslaught. The astounding drumwork is often hyperspeeded, but the other instruments aren’t left behind, as the technical ability is very satisfying, as are the extremely adequate vocals. There is clearly a will to create ominous atmospheres with the use of some interludes, and it shows the work; the black and white artwork of the cover, depicting some apocalyptic, anti-christian episode, adds to that effect, and reflects the music: dark and blasphemous, but precise and professional. What matters when listening to an album like this is that, even if you say, “it’s been done before”, it is indeed hard not to be truly impressed by remarkable songs such as ‘Into The Abyss’, with some magnificent DISSECTION like moments, or the apotheotic ‘The Swords Of Night And Day’. If you like very fast, aggressive and satanic music but like it to be well played and with a majestic production, you need to look no further; this is definitely for you. For more information go to www.facebook.com/serpentsoath, www.facebook.com/soulsellerrecords