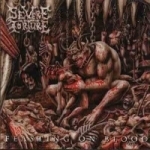 Now that SUFFOCATION are deceased, there seems to be a glut of underground bands out there will to try and pay homage to their fallen heroes in some shape or form, SEVERE TORTURE being of no exception here. The Americans always did seem to have more musical proficiency than us Europeans but this now seems to be changing as the level of musicianship displayed on this particular CD is of a very high standard. SEVERE TORTURE beat their instruments mercilessly in order to pummel our heads into violent submission! Reference points here would be SUFFOCATION and CANNIBAL CORPSE, the latter being an influence on their guitar work, SUFFOCATION being an influence on their all out brutality and the vocals especially! Not exactly my personal choice of Death Metal to listen to but I cannot fault the thought and ability gone into writing these songs. This is a must for any self respecting fan of violent, gore ridden Death Metal who still worships at the altar of SUFFOCATION.