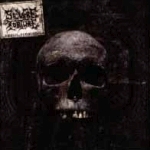 Although SEVERE TORTURE’s discography has been tended to quite suitably within these pages, this CD, SEVERE’s sophomore effort on Earache, their actual forth studio album, is the first chance meeting of this band and my pen. From the past reviews herein this band seems to definitely be making substantial technical leaps between album releases. Early comparisons to CANNIBAL CORPSE and SUFFOCATION can definitely be heard within “Sworn Vengeance”, these influences have not vanished as I had previously read, about “Fall Of The Despised”. And there is as well a healthy helping of DEICIDE now within their sound. To say SEVERE TORTURE is a clone act or rip-off band would certainly be an ignorant comment, yet there’s so many points of reference on this CD that it is absolutely possible a lesser individual could accept that perception as truth, when in fact SEVERE TORTURE walk a fine line between life impersonating art. And walk that line convincingly. Backing vocals on ‘Buried Hatchet’, the band’s eighth track on this disc, are supplied by Jason of MISERY INDEX and Che’ from fellow countrymen BORN FROM PAIN. Produced at Excess Studios – Holland and thanks definitely go out to those board handlers, mixed – Studio Hertz (DECAPITATED, VADER, SUHRIM). Limited edition first editions of this CD are said to contain, both CRO-MAGS and ENTOMBED covers, as well as an Ipod EP soon to follow (will technology never cease to amaze?!) with a stab at an AUTOPSY cover as a bonus. From the press sheet sent from Earache it states this album is indeed a step forward for the band, and that “SEVERE TORTURE have succeeded in elevating themselves from the mass of Death Metal bands covering the same old ground and constructed something far more forward thinking.” I don’t know about all of that. Yet I will say there was some interesting back-masking going on at the intro / start up of ‘Dismal Perception’, the CD’s opening song, that held my attention for a few seconds. Mosh354 out now! Contact: www.severetorture.com or www.earache.com