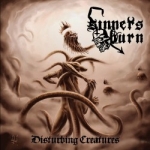 So it seems this is already the 4th full-length album by SINNERS BURN which started as a drunken project by PAGANIZER’s "Deadbanger" line-up back in 2007 and went on to become its own entity. The line-up has been changing on every release ever since and I haven’t heard the previous albums, but if they are anything like "Disturbing Creatures", then I’m sure I haven’t missed much. See, for me there’s a limit of how many traditional Swedish Death Metal bands I can really enjoy, before it becomes dull. The riffs that SINNERS BURN play have been played on hundreds of other albums, I could easily name at least 15 bands which released the same sounding records in 2014, but while I don’t have anything against the Sunlight Studio sound from the 90s, which has been replicated here to the last miniature detail, I want to hear some aggressive songs that grab me by the throat and don’t let go. Instead I get an audio lesson of how to copy GRAVE, UNLEASHED, DESULTORY or PAGANIZER without any sign or attempt to put their own stamp to the genre. This release is so fuckin generic, dull and boring, that even after playing it 5 times, I couldn’t remember any stand-out track or even riff. Well, maybe one at the beginning of ‘Sweet Stench Of Death’ wasn’t bad, but then it all went back to the same-same shit that’s been coming out from 2nd degree Swedish bands for 25 years now. Take the most boring mid-paced GRAVE song, multiply it by 10 times and you’ll have the SINNERS BURN album. If this was the band’s first album, I wouldn’t be so harsh and probably say: ok, let’s see how they will develop, you know, cut them some slack, but to keep churning out the same sounding, dull songs on the 4th album… nah, it doesnt hook me at all. 1-2 tracks might be ok, 10 are just too fuckin much. Fail. More information at: www.sinnersburn.com, www.facebook.com/pages/sinners-burn/127911497046, www.vicrecords.com