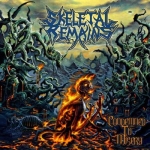 What can I say about F.D.A. Records? This German label has been signing some premiere old school style Death Metal bands the last 6 years. I can’t even imagine how many demos they must go through on a daily basis and how they filter them to ensure they are really selecting choice bands, but regardless they have a good intuition about it. If you really think about it here, it is an impressive list of who they have signed or have released material from in the past couple of years: CHAPEL OF DISEASE, DESERTED FEAR, OBSCURE INFINITY, FUNERAL WHORE, WEAK ASIDE, SLAUGHTERDAY and MASTER (to name just a few). Yeah exactly what you just said "Wow, that is an impressive line-up", well once again the F.D.A. Records machine has come up with a taste of some late 80s / early 90s Death Metal in the form of California’s very own SKELETAL REMAINS’ "Condemned To Misery". The opening track ‘Beyond Cremation’ will blow you right away and sets the pace for what to expect on this album. Right away you can feel the Martin Van Drunen inspired vocals that bring that nostalgia of early PESTILENCE / ASPHYX. Good stuff right there, musically the band really does a great job in bringing the chugging guitars and drums of war. There is also a nice use of keyboards, not overwhelming but just enough to provide a nice ambience. The music also has a melodic side which to me is always a plus as I hate to get bogged down by super technical musicianship that I lose interest. Not that being a virtuoso on an instrument is a bad thing but to me there has to be a nice balance and not make a JOE SATRIANI or STEVE VAI record. Nonetheless, the musicians here really showcase the heavy riffs. I think my favorite tracks on this album are tracks 4 ‘Viral Hemorrhagic Pyrexia’ and track 6 ‘Ethereal Erosion’. These jams are really sick and really require several listens. Ultimately SKELETAL REMAINS really do a nice job with their second offering on F.D.A. Records records and I would like to see what they can do live. Being that they are from California I’m sure they tear it up in their native state but hopefully they get to hit the entire US on a national tour. If you are feeling the need for some refreshing yet nostalgic sounds, check out the F.D.A. Records catalog, but start with this album first. For more info: www.facebook.com/pages/skeletal-remains/199922500049271, www.fda-records.com